Bearing the weight of the body, the knees are a common source of pain 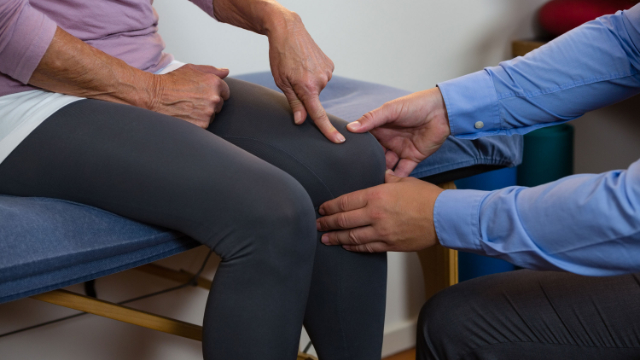 There are certain areas of the body that are simply more prone to pain than others, and the knee is one region that clearly falls into this category. Knee pain ranks just behind back pain as the second most common condition that affects the muscles and bones. It’s the single greatest cause of disability in individuals who are 65 and older, but can occur in anyone regardless of their age, lifestyle, or activity level.

The knee is one of the largest and most complex joints in the body, and it’s incredibly vulnerable to injury because it’s used so much and consists of so many parts. It joins the thighbone (femur) to the shinbone (tibia), and is also made up of the kneecap (patella) and the other lower leg bone (fibula). All of these bones and the surrounding muscles are connected through a series of ligaments and tendons, which collectively help to stabilize the knee and allow it to bend, twist, and rotate.

Sudden injuries and overuse are most common in younger populations

For children and adolescents, most cases of knee pain are related to participation in sports. Whether in organized sports or when playing pick-up games with friends, kids and teens can get injured from a number of different causes. Many injuries are due to a fall or accident, which can push certain structures of the knee too far and cause them to tear. These are known as traumatic injuries, which are particularly common in athletes involved in sports that require cutting movements like basketball, football, and soccer. Sprains (which affect the ligaments,) and strains (which affect the muscles and tendons) are the most common types of traumatic knee injuries that cause pain in children, and in extreme circumstances, tears of the meniscus, ACL, or other knee ligaments are also possible.

In other cases, knee pain develops gradually over time, and pinpointing its cause is more challenging. What happens is performing certain movements over and over leads to minor damage, and over time this damage accumulates and leads to inflammation, irritation, and pain. Children who play a single sport all year round without taking enough time to rest and recover are at an increased risk for these overuse injuries, which may be more difficult to treat than traumatic injuries.

One of the more common overuse injuries of the knee in this population is called Osgood-Schlatter disease, which is an inflammation of the area just below the knee where the patella attaches to the tibia. It’s most frequently experienced in adolescents who regularly participate in sports with lots of running, jumping and/or rapid changes of direction, and the further they push their bodies, the greater the chance of developing this condition. Other overuse injuries include patellar tendinopathy (jumper’s knee), iliotibial band syndrome, and patellofemoral pain syndrome (runner’s knee), which are described in more detail later.

Knee pain continues to be a common issue in older age, but the causes responsible tend to change later in life. The majority of cases of knee pain in adults are due to knee osteoarthritis (OA), which is a significant global health issue. The lifetime risk of developing knee OA is 45%, and the likelihood of getting it increases with each decade of life.

Knee OA is so common in adults because of gradual damage and natural changes that the body experiences through the aging process. The knees absorb a great deal of pressure every time you take a step. So over time, simply moving around and being active can stress and strain various structures of the knee. In addition, the muscles and ligaments tend to get weaker as the body gets older, and both the meniscus and the articular cartilage that protects the ends of bones of the knee eventually start to deteriorate. The combination of all of these changes is less protection between these bones, and the result is knee OA, which is characterized by pain, stiffness, and swelling. Knee OA affects at least 19% of adults aged 45 and older, and is a significant cause of disability in these individuals.

But knee OA is certainly not the only cause of knee pain in adults. The risk for traumatic injuries, like sprains, strains, tears of the ACL and meniscus, and fractures remains high for those who continue to regularly participate in high-energy sports. Overuse injuries involving the knee are also a concern for active adults, and the likelihood of experiencing these types of injuries increases with advancing age because structures can become more damaged over time. Below are some of the more common overuse injuries of the knee: